Controversy makes for a good story, and this one involved politics of the time. The Trans-Atlantic Challenge 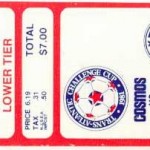 However, Donetsk Shakhter pulled out at the last minute and was replaced by the Glasgow Celtics. The NY Cosmos were planning to play a white South African footballer on their roster, Steve Wegerle, which flared anti-aparteid sentiments and Donetsk Shakhter boycotted the game. At the time Donetsk Shakhter was part of the Soviet Union which adhered to a UN-sanctioned boycott of South African athletes. Wegerle had been in the US since 1977, was a US resident and had already played in the NASL for a few years.

I found these ticket stubs completely by accident tucked in with memorabilia of a Scottish band I liked. That was an odd place for them until I looked on the back of the tickets and in my handwriting, it read “Cosmos vs. Celtics, 7/12/81, 7:30 pm”. That made more sense. No wonder I couldn’t recall ever seeing a team by the name Donetsk Shakhter. That’s because they never played that day.

Chucho Valdés with The Afro-Cuban Messengers