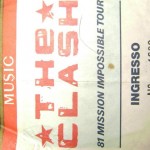 I was a student studying Architecture in Roma with Pratt Institute in 1981 and with a few other students we made the short train ride up to Florence and walk over to Stadio Comunale. It was a time when McDonald’s had not made it’s inroads into the Italian market and the Red Brigade was still running around.

The Army and Carabinieri had ringed the stadium, carrying automatic weapons, which were very common in Italy at this time and more for our protection, then against us. When we got into the stadium we took seats in the stands because the infield was closed off with a chain link fence and packed with black hair kids. During the concert they moved with the music in waves that passed thru them and you just saw top of their heads flow back and fore.

The Clash preformed with the energy and the crowd responded. I can’t remember all of the songs in the set that night but “London Calling” is one I do recall. The band core of Joe, 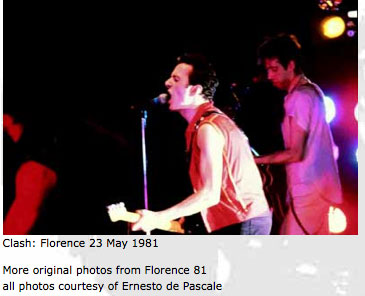 Mick and Paul with Terry were at their top of their game that night.

Just a little other information the stadium was design in 1931 by Pier Luigi Nervi, the same Engineer/Architect who design the George Washington Bridge Bus Terminal and many other buildings around the world.