1995 season finale, and we just knew it was going to be Sam Wyche’s last game as Bucs head coach. New 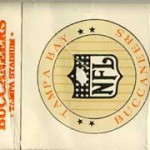 owners had taken over, and a campaign was on to save the Tampa Bay Bucs and keep them in Tampa Bay. A new stadium had to be built with taxpayer dollars, and it eventually  got passed but at the time, no one knew if it would.

This was a 4PM game, and earlier in the afternoon, the NY Giants game was on TV. That was the game people got arrested for throwing snowballs at players, officials, coaches, basically anyone! The Mood was set!!

Early on the Lions took care of the Bucs. Sam Wyche Pulled Trent Dilfer after the first quarter, for Casey Weldon. It was a move Weldon told Dilfer was going to happen, but Trent didn’t believe him. They argued on the golf course! The game was getting out of hand!

Then the Giants game came to our mind! The seats were 4 rows up from the field, right behind the Lions bench. But alas, no snowballs! – What could we use?

We wadded up pages of programs and proceeded to pelt Lions players with not only Paper wads but taunts as well.

“Bennie”  we called for Bennie Blades, who cousin had been shot under mysterious circumstances.
“Bennie”….. he turned around…..our fingers  pointed at him, thumbs up, like kids playing cops and robbers or cowboys and indians, in mock gun form.

Cruel? Yes. Sportsmanship? No.  We were Bucs fans in the middle of 14 straight double digit losing seasons. What can we say?

Memo to Barry Sanders, that thing that wiffed passed your helmet at 20 miles an hour? was probably an advertisement with your picture on it. “Give unto Sanders that which is Sanders!”

Surprisingly, we made it through the whole game. I locked my keys in my car, we had to run all over the place to find someone to open it for us.

Nick Houllis is the webmaster of www.bucstop.com the definitive source location for all things Tampa Bay Buccaneer related.

Gretzky skates off for the last time