In 2006 a friend and I were in Phoenix, Arizona for a meeting. We had some time off so we make 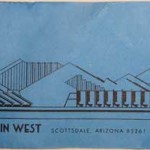 the journey to Taliesin West the winter office and school for Frank Lloyd Wright in Scottsdale.

This day they had had two different tours that visited different sections of the complex. So we bought tickets to both tours but the 1st tour ended after the 2nd tour started, both ended at the Cabaret Theater. So we started with the 1st tour and before it ended we quickly moved to the 2nd tour when it started.

We were able to see all that both tours visited and more of the complex then either tour viewed alone. Frank Lloyd Wright could easily be considered the greatest American Architect, especially if you had asked him. I’m sure you know his two most famous building Falling Water, Mill Run, PA and the Solomon R. Guggenheim Museum. New York, NY.

Frank Lloyd Wright summer office and school were at Taliesin East, Spring Green, WI. As always, if you’re lucky enough to be near any of his buildings go and tour them. Frank Lloyd Wright had a long, extraordinary career and life; it would not be a waste of time to read up on it or watch a special on TV about him. His sometime controversial life style, view of the world and his place in it are noteworthy.

A small story I have heard many times, so I believe it to be true or has become true over time. Frank Lloyd Wright houses were built with flat roof and long overhangs, flat roof have problems with leaks, so when a client calls up Frank and states that his roof is leaking on to his desk, Frank replies move your desk.

Star Wars – The Magic of Myth