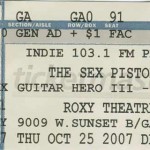 rest.  Steve Jones was hosting “Jonesy’s Jukebox” on Indie 103.1 and I was/am a rabid Jonesy fan.  Paul Cook guested on Steve’s show and their banter about their Sex Pistols days were side splitting hilarious.

Word busted out that the Sex Pistols were going to do a one-off show and tickets were impossible to come by.  You could win them on Indie 103.1 and I was on manic re-dial 24/7.  I came close a few times to winning but no luck.  I begged.  I cajoled. I pleaded with everyone I knew to score tickets.  Impossible.

T minus 2 days to the show I got the call I was on the list +1.  I had knee surgery scheduled and cancelled it immediately. Rock & Roll history will always trump self care. The night of the show was utter mayhem outside on the Sunset Strip.  The inside was standing room only but, as always, my guardian angels at the Roxy served me up a lone chair for my gimpy knee.

The lights went down and the Pistols whipped it out immediately!  “Anarchy in the U.K” , “God Save The Queen”…..they railed through their historical album with all the vim and vile spewed 30 years earlier.  The crowd lapped it up like wolverines.  Older, maybe wiser but most definitely with their wicked wit still intact, John Lydon, Steve Jones and Paul Cook showed us they didn’t need any Rock & Roll Hall of Fame to show the impact they had on a generation of kids in the 70’s.  I left feeling like a punk…still rebellious…a little weathered and worn….but still a punk at heart. 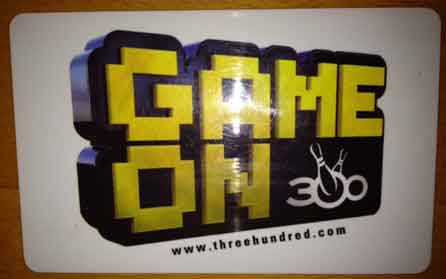