In what turned out to be another mediocre season, it was a pleasant surprise 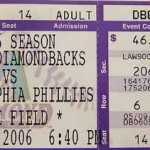 when the Phils came back from down 3 to win this one in the desert. We didn’t realize that we we on the verge of becoming a team of serious butt-kickers, and I think we were maybe 10 games over by the end of the year.

I was at the game with my brother – who had just landed a job as a manager a Hooter’s (and let me tell you that Arizona is where you WANT to be a manager at Hooter’s) so he was really feeling like Mr. Big.

With a couple of runs in the 6th, 7th and/or 8th – we stayed till the end, and got a little (let’s just call it abuse) from the Arizona fans. It seemed like there were

maybe 5,000 in the place that day and being from Philly we were ready to take them all on.

But – calmer heads prevailed – we traded our Phillie’s jersey for a couple of Magnum P.I. shirts and went out on the town instead.

Another Shot at Red Sox Nation