When Page & Plant announced that they were going to tour, I had to go. It was going to be the 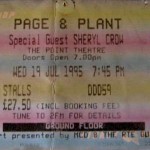 closest to a Led Zeppelin concert I was ever going to go.

Sheryl Crow was to be the support act but cancelled. I think at the time she had problems with her throat.

Instead the Scottish band Big Country played.They were big in the 80’s, their biggest hit was the song “Look away”. It was No.1 here in Ireland in 1986.

The concert was held at the Point Theater which is now called the O2. I was there early. First time I was at a all seated venue. Big Country came on to play. It was a pity not many people turned up to see them. I really enjoyed them.

In 2001,their lead singer/guitartist (Stuart Adamson) was found dead after commiting suicide. At the moment, Big Country are touring with Mike Peters of the Alarm and Jamie Watson added to the lineup.

Then it was time for Page and Plant.They had with them a orchestra and a group called the Egyptian Pharaohs backing them. It gave the Led Zeppelin songs a new twist. It was amazing to hear “Kashmir” with the orchestra. And when they played “whole lotta love”, I couldn’t stay in my seat. 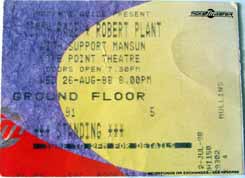 Edaville USA – Fun with the Grandson