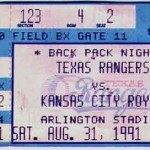 Rangers played at, it was a very wide open stadium – long fences. You can tell by my picture of Gibson how deep the fences are.

I was telling the kids about Kirk Gibson who the Royals picked up from the Dodgers for just one year. In the 1988 World Series 1st game against the heavily favored Oakland A’s, Gibson got called to pinch hit in the 9th inning with 2 outs. He’d been in the locker room the whole
game icing his sore knees. He worked the count full with the tying run on 1st base and he kept fouling balls off, waiting to get a good ball to hit. Well finally, he drilled it over the fence for a home run.

That “at bat” has since become legendary in the baseball world, and is regarded as one of the greatest home runs of all time. Because the Dodgers were all injured and were quite the underdogs but this 1st game victory sure changed the momentum. It was voted the “greatest moment in LA sports history” in a 1995 poll. Many of the images associated with the home run, particularly Gibson pumping his fist while circling the bases, are often shown in classic highlight reels.

At least we got his autograph and he hit a shot well over the 400 foot centerfield fence (probably about a 450-460 foot shot, Mantle’s longest homerun was 565 feet). I got Gibson’s picture too as he was walking out to left field. There were a lot of hits (14) in this close game, which the Royals won 3 to 2. We got to see George Brett D.H. but missed Nolan Ryan’s pitching turn. It’s always enjoyable going to a different city to catch your home team. 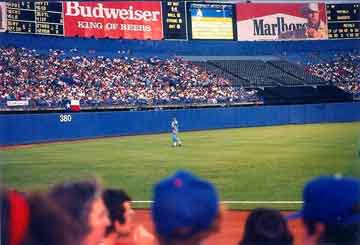