In 1981, I was a kid growing up in Reagan Country, aka Simi Valley CA.A bedroom community 35 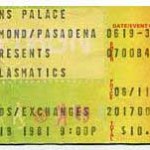 miles NW of downtown Los Angeles, Simi Valley was constantly ranked as one of America’s safest cities. During those times, Simi – like much of suburban America, was fertile ground for bored young kids and the punk rock movement was there to rescue them.

I was 16 at the time, and my friend Scott Roth – all SoCal high schools had a Scott, that dude with the driver’s license and a penchant for downstroke music in dark clubs -had been spinning Black Flag and Plasmatics EP’s for me for months. So when the tickets for a live show became available, we were amped for the live experience. So, with friends Finner and Scott, off we hurtled to Pasadena, home of the oh-so-pleasant Tournament of Roses Parade. 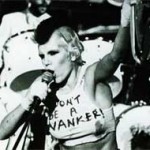 We arrived early at the venerable Perkins Palace and somehow the yellow-jacketed security guys goofed and took our tickets, letting us in well before the doors were scheduled to open. While they tried to shoo a bunch of punks back outside until sound check was over (good luck with that), we hid in the bathrooms and preceded to poke around until we found ourselves in the green room. Next thing I know we’re noshing on fruits and veggies with lead singer and punk icon Wendy O. Williams. She was so nice and cool to us! We must have looked sheepish, because she offered us autographs. (The beer trays were her idea.)

The concert was, as I find most punk shows, hilariously entertaining. The band probably played its entire catalogue in about an hour (I remember Pig is a Pig, Monkey Suit and  Butcher Baby) smashed a CB radio midway through, and finished by blowing up a school bus on stage. What can I say, Roger Waters had his style, Wendy-O had her’s.

Written by Russ Haven of www.TicketStubCollection.com