Monday Night Football at the Jet Game. I’d like to think of myself as a “glass half full” type of guy. But, 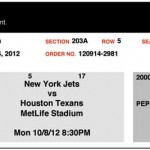 growing up in Queens, and being genetically programmed to be a Met and Jet fan has turned me more into a “dribble glass” kinda guy. So it was with mixed enthusiasm that my wife, daughter and I set out to the Meadowlands (excuse me – Met Life stadium) to see if the Jets would do any better against the Texans than they did the week before against the 49’ers.

To paraphrase Robert Cray and Mr. T – the forecast called for pain – but thankfully not rain. I love my iPhone and it told me we were looking at a cloudy but dry night. But then again, all things connected to a Jet game are now tinged with the stain of 40+ years of ineptitude, and sure enough it was pouring buckets within minutes of hitting the road. No raincoats, “Daddy I have a headache” and “Honey that ramp to the GW scares me” were all I had to think about as the wipers worked their way back and forth. 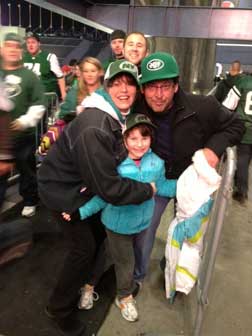 Now don’t get me wrong, these tickets were a great birthday gift from my wife and daughter, and though it was a Monday night, in a town where fans had been known to set seats ablaze when things go bad, I was ready for worst – hoping for something in the middle. Had the best occurred, you might have had to grab the defibrillator, but few thought we’d win, just getting in and out in one piece would suffice.

Then we started catching breaks… In Jersey the rain stops, and traffic disappears and when I park at E15 it turns out my lifelong buddy is tailgating at E14. Really, out of 40,000 cars we wind up 100 feet away from each other? Good luck at a Jet game? When would it end?

Your answer – shortly after kickoff.

As for the game – the Jets did not get shelled, and the seats did not burn. Our section was full of well mannered fans, and my little girl didn’t hear any words she hadn’t already heard. Maybe a few strung together in an order she was unfamiliar with – but nothing to make her ears (or her Hello Kitty earmuffs) fall off. By the 2nd quarter she’s getting into the act – screaming lines like “Aren’t you guys putting in any EFFORT?”, “Don’t you WANT to win?”. Alas she’d replaced the conventional headache with another – being a Jet fan.

At least there were no Rich Kotite sightings (4 wins in 2 seasons), we’re 2 and 3 and the chants for Tebow were thankfully few (though I think I heard some coming from the owner’s box).

It was a great birthday present, the biggest event my little girl had ever seen and a night I won’t soon forget.

Dad’s First Soccer Match in the U.S. – “Where are the fences?”

Don’t you wish you worked with me