I have always wanted to attend a “Ramble” (Levon Helms’ Midnight Ramble in Woodstock at his home and barn). 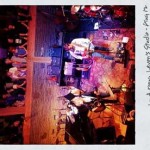 Unfortunately, Levon has passed on this year. However, Larry Campbell and the rest of Levons’ band are carrying on the tradition, inviting special guests to play in this intimate setting. I jumped at the chance to see Lucinda Williams play this past Saturday night, along with her guitarist Doug Pettibone.

At 150 dollars per ticket, this would be the most expensive concert I have ever seen for a single event. But I have heard stories from friends that the venue is great and well worth the price of admission. My wife and I were fortunate enough to get a seat in this room filled to the brim.We were in the last row on the floor level, which is about 20 feet from the stage. There is a tiny balcony that surrounds the front and sides of the stage also, and another small, standing room only area behind the stage.

So, in actuality, no one is more than 20 feet from the performers. Lucinda hit the stage and immediately told the sound man to bring it way down. “We don’t need much in this room, the acoustics are great”, she said. Lucinda was in great voice and as she went from new songs to old, Doug played the sweetest fills. After hearing such a beautiful set, Lucinda left the stage and then the Midnight Ramble Band came out shortly after.

This is no ordinary band. I’m talking horns, piano, accordion, guitars, two drummers, back up singers…and they rocked the house. They played songs that transported me to New Orleans, Mexico, Spain, Texas..wow. I have never heard a band like this in all my 53 years, and I go to plenty of live performances throughout the year. They called Lucinda back up to play with them, and as Lucinda said, you could feel Levons’ presence.

Such a wonderful night.Unfortunately, they do not give ticket stubs, but i will treasure this memory forever..well worth the price of admission. 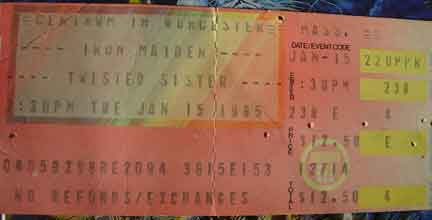 The Who at the Tangerine Bowl 1982