at the Miller time concert series on the pier in NYC on Friday, September 7.

The music the band played is called JuJu and is a popular style of Nigerian music, comes from traditional Yoruba percussion. Basically it’s Nigerian party music.

This is not is a form of magical witchcraft common in West Africa, Haiti, Cuba and other South American nations, contrary 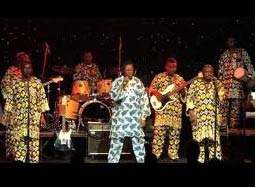 to some misinformed people. It was an interesting evening of music, the drums and the rhythm. It’s always great to be able be at a performance of bands from around the world with a different take on the world.