Wow! Loved every minute of the show.  We attended the show because first and foremost, we love Lewis.  My wife (Tedi) and I were 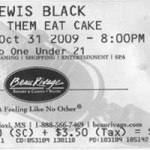 d an Oct. 31, 2009 date in Biloxi (which is an hour’s drive from our Abita Springs, La. home), but I also want to believe Lewis got a mental message

there were at least two fans in Louisiana who wanted to see him perform.  We were not disappointed.  My favorite line from the show: “Any of you out there who identify yourselves as either a Democrat or Republican, my hat’s off to you.  ‘Cause I don’t know how you do it.”  He went on to point out that neither Bill Clinton nor George W. Bush ever took responsibility for their actions.  This is emblematic of our entire staff of politicians nationwide and Lewis nailed it.

We met Lewis and his warm-up act (a man named John, I think, who did a wonderful job.  I regret not
remembering his name, it was rude of me) at the craps table in the Beau Rivage Casino (his performance was at the Casino’s theater).  Lewis and his friend were extremely gracious and chatted with us and others who came by the table.  I do have one regret about this meeting.  During his performance, Lewis mused about what celebrity or otherwise famous person we would like to have a beer with.  I was feeling guilty about imposing too long around the craps table and decided to leave him and his friend to their good time (and they were demonstrative about how much fun they were having rolling those dice) without further imposing.  Several hours later, I realized I missed an opportunity to ask Lewis and his friend if we could have a beer with him and his friend after they were finished at the craps table.  Lewis is one person I would love having a beer with.

One other personal item about this wonderful time Tedi and I had: Tedi had refused to get married on Nov. 10, 1986 and I settled on 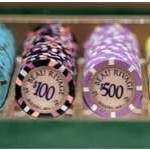 Oct. 31 as a compromise.  My wife loves me dearly, but she did not want to get married on the U.S. Marine Corps birthday.  She said she has to compete too much with my old USMC buddies and all other things that surround my love for the Corps.  I had to agree with her and that’s why we were married on Halloween. Thanks to Lewis we had a tremendous anniversary that would have otherwise been less scary.  Lewis’ truth is quite scary, I believe.

The Magic of Summerstock – Kid’s Style