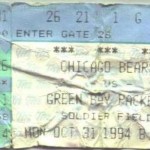 Soldier Field, but not because of ghosts, ghouls, or even the football game between longtime bitter rivals Green Bay and Chicago that was to take place. It was the weather, which explains the rough condition of the ticket stub seen here.

It was Monday Night Football, and it was a very cold 42 degrees, very windy, and it rained from start to finish. It was raining sideways. A rain poncho or any other rain gear was of little help. My fellow fans and I got soaked anyway. What made the night bearable (no pun intended) was that I am a Packer fan and the Packers had their way that night. They beat the Bears 33-6.

Several weeks before the game, a friend of mine and I decided that we would make the trek from Wisconsin to support our beloved Packers. I purchased the end zone seat tickets, which had a face value of $28.00, for $125.00 each from one of the ticket outlets. It turns out we could have had tickets for $3.00 each. That’s what they were selling for outside the stadium that night. The weather really was that bad. 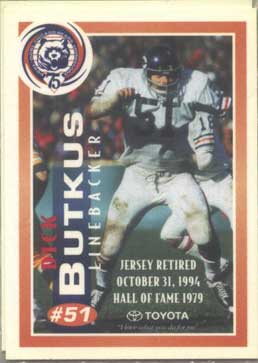 Both the Bears and the Packers wore their throwback jerseys that night. It was 1994, the NFL’s 75th anniversary, and all of the teams wore the throwbacks for two or three games that season. The game itself really wasn’t much from a competitive standpoint, but the Packers were on the rise, and this was right about the time that Brett Favre was becoming a star. Furthermore, “weather” games are always fun to watch.

At halftime, the Bears retired the jerseys of Dick Butkus and Gayle Sayers (all fans received the Butkus and Sayers cards that I have scanned). We sought shelter in the concourse and missed the ceremony. I can still remember the people piling out of the stadium after the ceremony was over. You would have thought the game was over. The stadium was maybe a third full for the second half, with Packer fans being in the majority. We gradually migrated from our assigned seats in the end zone as time moved along and wound up with seats 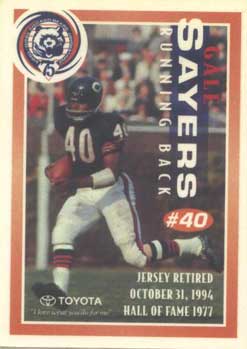 on about the 40-yard line by games’ end.

keywords: Packers vs. Bears on a cold and rainy Halloween 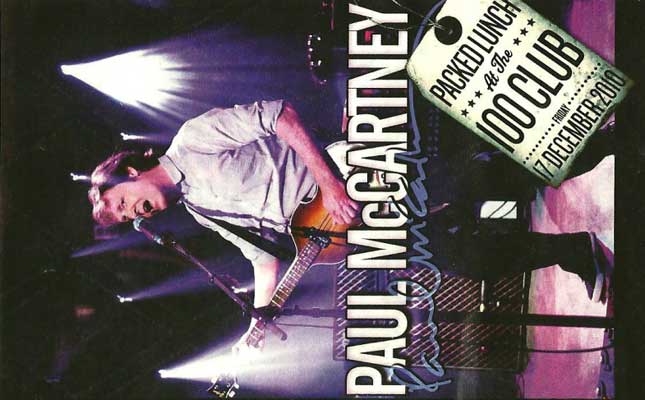