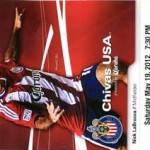 neighbors from down the hall, would be an understatement.  And while I was trying to be as hopeful as can be, history certainly wasn’t helping. Despite it all, the supporters were in good spirits.  Even the ones who support Bayern Munich on the side were up for the match.  The best anyone can hope for is a good result.  So after dispensing with the pleasantries, it was off to the Black Army section to support the Goats.  Of interest to many were two new acquisitions,  19-year old forward Juan Agudelo and defender Danny Califf.  And wouldn’t you know, they both started the match.

Unlike previous matches against the Galaxy, this one looked even.  Gone for the most part were crosses that went nowhere and the opposition wasn’t firing on all cylinders like the usually did.  As with these kinds of matches, emotions can always rise and get the better of us.  It’s how we deal with these situations that define us as groups.  A big supporter of Non-violence, Black Army members are quick to act to quell any and all situations that can go wrong.   For the point of the group is to support the Goats above and beyond.

This isn’t to say it’s a bad thing when emotions get the best of us either.  One penalty kick in the 72nd minute and grown men can burst into tears.  Complete strangers can hug in jubilation celebrating the end of a shutout streak that went back to 2010.  And voices can be lost.  As the final 18 (plus 4 additional minutes of stoppage time) rolled on, palms were clenched tightly, hearts skipped a beat, and breaths were collectively held whenever the neighbors were fouled, got a counterattack rolling, or came over to take a corner kick.

As the match concluded, a celebration started that went on for the better part of 30 minutes.  To an outsider everything might have seen as excess.  A 1-0 win, early in the season, against a struggling team with injured players, and the only goal coming only in the form of a PK (though to be fair was originally going in as a legitimate goal before it found the hand of a Galaxy defender).  But to someone on the inside, it had been far too long.  Far too long since on one September evening in 2007.