I saw Will’s show “Ireland- Where the Song and Dance Began” in Trail, British Columbia, on

November 9, 2004 (one day short of 34 years since I first saw the Irish Rovers in concert). It is WONDERFUL! This is a different kind of show than what he used to do with the Irish Rovers. “Ireland” tells the story of Ireland from the early days through the potato famine and up to the early days of the 20th century. There’s singing of course, but it’s interspersed with great dancing by Phillip Brady and some of his pupils, great fiddling by Kathleen Keane, Ian Millar, Martin Nolan, Shelia Ryan on harp, and Davey Walker. The music is illustrated with slides and video from Will’s own collection of antique newspaper articles and pictures. All this is tied together with narration and jokes told by Will as the seanachie (story teller). A special treat by Kathleen Keane was when not only did she play the fiddle, not only did she dance, but she danced WHILE playing the fiddle!!(And I’m doing good to walk and chew gum at the same time!) There was a drawing during the show to give one member of the audience a chance to win free tickets for a trip to Ireland next year but I didn’t win that. Still, I had a great time and it is a fantastic show. Will said afterwards that he would like to bring the show to the US, particularly the East Coast, and I certainly hope he can do that.

The ticket price was $39.50 (Canadian) plus the gas to drive up there, plus the motel – but it was worth every penny!

I should have backtracked and tried to find the motel I was originally thinking of staying at, since it turned out that’s where Will and the group were staying. But I drove right past it due to the fog and the traffic, so I settled for a different motel about 3 miles further on. After the show Will invited the audience to come have a drink with them and the pub they chose was right across the

highway from where they were staying. I wasn’t sure where that was, but one lady who sat next to me during the show turned out to be a reporter for the local paper, and she went to school with the owner of this pub so she knew right where it was. She rode in my car and told me how to get there (I guess both of us had a gut feeling that the other person wasn’t some psychopath killer – we both took a big chance there). Her name is Lana Rodlie and she works for the Trail Daily Times. Will sat at our table and we all had something to drink and shared nachos and talked.

to read more of Charlene’s stories, stay tuned to Stubstory.com or visit 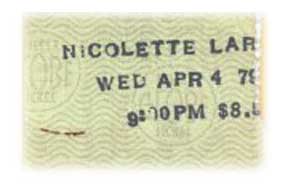 Nicolette Larson the “It” girl 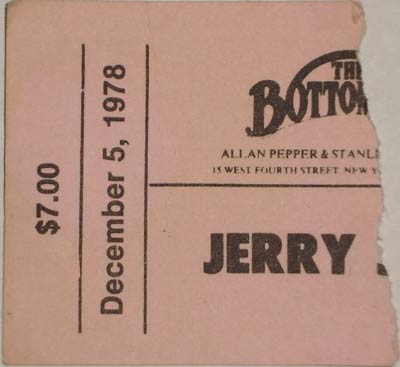 Lindsey Buckingham – at the Ridgefield Playhouse