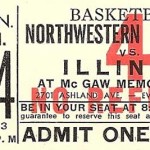 My father (Illinois, Class of 1938), brother and I sat high up on the Illinois side in row 31 at midcourt. The 3-8 Wildcats played tough the entire game, which was tied 76-76 with 13 seconds left in regulation. Tal Brody, who later became a star player and successful coach in Israel, took the inbounds pass and pushed the ball upcourt to Illini captain Bob Starnes. From just short of midcourt, about 55 feet from the basket, Starnes fired the final shot, which swished just as the buzzer sounded. Illinois fans went nuts, while the remainder of the 7,200 attendees looked on in disbelief.

Illinois would go on to win the Big 10 title and lose to eventual winner Loyola University in the NCAA tournament. That seems fitting, given Loyola’s equally exciting last-second basket, a put-back by Vic Rouse, to win the championship.