I Need a Miracle Further

We saw Further play on Sunday 3/6 at the Orpheum in Boston. Further is a band consisting of Bob 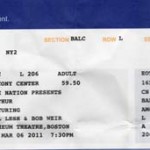 Weir, Phil Lesh, and a bunch of other guys that were not in the Grateful Dead.

The Orpheum balcony is not ideal for a show where you might want to move an inch or two around. Fortunately I read about how incredibly hot it is on Yelp before I went and wore a tank top, but it’s so hot it makes you very sleepy. And if you’re 5’ 8” like I am, the balcony seats will cripple you. I grabbed an end seat for a couple of happy minutes until its rightful owner arrived, damn him. Also, beer was $12 a cup.

Here Comes Sunshine, Alligator and Maxwell Silver Hammer were all fun. Hearing them cover Time > Breathe (reprise) by Pink Floyd was amazing. That’s so sad about Sid Vicious, I sniffed. Do you mean Sid Barrett, my husband asked? Yes, I did.

Do to extreme heat prostration we left after The Eleven, which was kind of unfortunate as I missed what sounds like a kick ass encore. Oh well. Further is OK, but I like Rat Dog or The Dead better, and none are as good as the real thing.

I hate the Red Sox