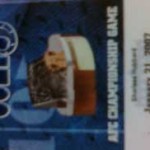 As far as I’m concerned, this was the beginning of the end of the Patriots dynasty. Sure, 2007 saw a freak resurgence due to the Bill Belichick Fantasy Team, but they were not the Super Bowl Patriots we had become accustomed to in New England. But, 2006 was still the Patriots time. Since our last Super Bowl, we saw a loss to the Broncos in the playoffs that was quite uncharacteristic for the Patriots. Between a Tom Brady red zone interception, a muffed punt by Troy Brown, and a missed field goal by Adam Vinatieri, it was the perfect concert of atypical miscues from a normally fundamentally sound core group of contributors. The world around New England was “fluke.”

2006, despite the departure of Vinatieri and unceremonious contract fallout and subsequent trade of Deion Branch, saw a typical Patriots season: unimpressive, steady, victory collecting. A bizarre divisional round win against the Chargers (the infamous Troy Brown strip after the Brady interception as the apex) saw the team, my father, brother, and his then-friend-future-wife fly to Indianapolis for a showdown against recent but intense rival, the Colts.

Going into the game, we were all fairly confident. We beat the Colts whenever there was a shred of importance to the game, and at the time, Peyton Manning was a choker, un-clutch, and had a diagnosable case of Happy Feet, as defined by the DSM IV. Sure, we had our issues as a team, mainly having Wide-Eyed Reche Caldwell as our number one receiver, and an aging defense, but we still thought this was a match-up we could thrive in. Dungy was second to Belichick. Manning was second to Brady. Four out of Six had a good ring to it.

There is a lot about that day that has faded through the years, but there is one moment that lives in my mind like a flashbulb memory, perhaps because it is so sharply contrasted by what followed. The Patriots were up 14-3 at the time, the game seemed to be going strongly in our favor. The high-powered Colts offense was being stymied, typical for a Patriots-Colts playoff game. On first down of the ensuing drive, the Colts had the ball, and the line of scrimmage was around the 15, a few yards prior to our seats. The Colts lined up, the Patriots aligned defensively. The Patriots were showing blitz, with one safety up top, Marvin Harrison up high, Reggie Wayne down low, Dallas Clark on the line off-tackle. Manning called his audibles, as he does before every single snap, and Asante Samuel, lined opposite Wayne, backed off coverage.

I will always remember this moment because, for perhaps the only time in my life, I read the play the same way Peyton Manning did. Blitz, coverage backed off against Wayne, single safety up top, can’t try deep ball, won’t have time, quick out to Wayne. Fortunately, Samuel saw the same thing as both of us. Manning snapped the ball, Wayne cut to the out route at the precise yard line aligned with our seats. Asante does not take one step backwards; he knew this route was coming, and was ready for it. The second Manning winds up, Asante lunges forward, jumps the route, the ball sails directly into his hands, as if Samuel identified the second the Colts lined up precisely where the ball would be, and strolls the 18 yards into the end zone.

21-3 Patriots. The stadium is silent, save for the four of us and scattered Patriots fans screaming their heads off. Another Manning collapse, another Colts choke, another Super Bowl for us, right?

To make a long story short, the Patriots blew an 18 point lead in 31 minutes, the Colts won the game and went on to defeat the hapless Bears in the Super Bowl.

Of course, I will always remember the game for the defeat. It was the end of the Patriots Dynasty as we knew it. But, from a personal standpoint, I will always remember it for containing that moment of pure jubilation, the most unabated elation I have ever experienced. When Asante jumped that route, picked it off and patted his chest in a gesture of self-glorification indicative of his future contractual holdout, I distinctly recall the unjustified pride I felt, as if I had telepathically informed Samuel to read the coverage and jump the route. It was, in a very strange way, as if I had done it. If Samuel hadn’t celebrated in such a self-promoting fashion, I might have survived in my fantastical daydream of accomplishment. I might have celebrated with him, instead of at him.

The fact that the celebration was short-lived is barely relevant in my memory. As I look at the stub, I recall the heartbreak, but more importantly, I remember the little victory I had. Because, isn’t that why we go to games in the first place? 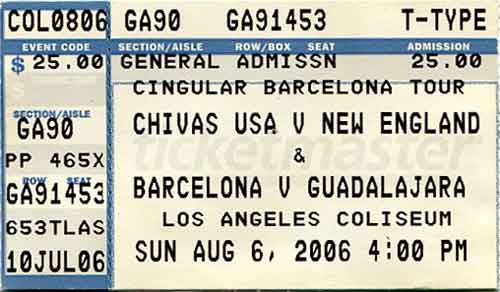