As a native of Parana, Brazil, I moved to NY when I was 7 years old. A few years later, someone you may have heard of – Pele – 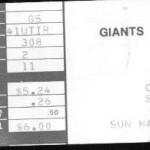 debuted with the NY Cosmos. I never saw Pele play in person, but attended NY Cosmos games regularly during the 1978 and 1979 seasons when a family friend started taking us. I was in middle school. Pele had retired, but was a regular fixture at home games.

On May 21, 1978 the NY Cosmos paid tribute to Franz Beckenbauer, a German player who had been with the team just shy of one year. My French teacher, Carol Marshall, organized a field trip and chaperoned a group of students from Hilltop Junior High (Nyack, NY) to “Franz Beckenbauer Day” at Giants Stadium where we witnessed the NY Cosmos wallop the Seattle Sounders 5-1 before a crowd of 71,219. The German Fischer Choir performed and several dignitaries attended. But perhaps one of my fondest memories was when Pele came out, spoke a few words about his friend former teammate and embraced him.

Fast forward to 2011. I now live in Portland, OR. And this year, the Portland Timbers made their debut in Major League Soccer. I’m a season ticket holder and am reliving childhood memories in a place that shares a true passion for soccer.

Prior to the start of the season, I started looking through my scrapbooks and found this ticket stub along with a photo of Pele paying tribute to Beckenbauer, a cut out from Kick Magazine, an original NY Times newspaper article about the game and the top half of my permission slip.

What were the chances there was anything related to Pacific Northwest soccer in that scrapbook? Pretty good, I guess. Earlier that week in May 1978, the NASL Portland Timbers had beaten the Cosmos 2-1 in Portland and the Cosmos were ready for some payback. The Seattle Sounders were the recipients of the thrashing on May 21, 1978 and I was there to see it.

Long time arch-rivals Portland Timbers and Seattle Sounders take to the pitch at Jeld-Wen Field in Portland on July 10.  Will I again witness my home team thrash the Seattle Sounders in front of a sell-out crowd? Only time will tell. 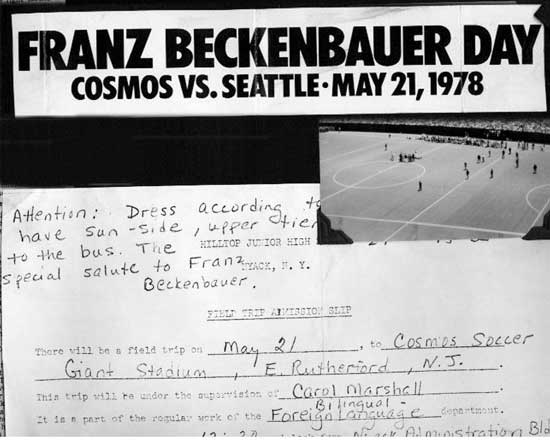 Glen Hansard at the Beacon Theatre