The retrospective of Frank Gehry’s work, that was held in 2001 at Solomon R. 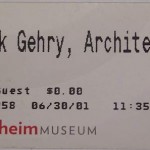 Guggenheim Museum in NYC featured Models, Plans, Drawings, Furniture, Photographs, and Video Footage, as well as Two Site-Specific Architectural Elements. This was the most comprehensive exhibit of his work at that time.

Frank Gehry has created a new architectural vocabulary that was well represented at this exhibit. It was amazing to walk on the Frank Lloyd Wright’s circular ramp designed museum viewing another Architect’s work.

I spend over 3 hours viewing the models, drawings, photos and videos and it was well worth every minute. If you ever get to visit Guggenheim Museum in Bilbao, Spain, Walt Disney Concert Hall in downtown Los Angeles, Dancing House in Prague or any of his other designs, spend some time and enjoy yourself, it will not be a waste of your time. 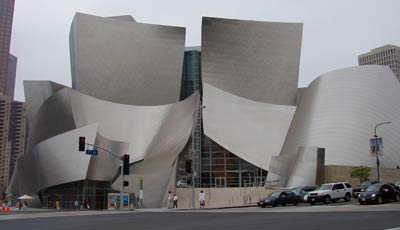 His buildings, including his private residence, have become tourist attractions. His works are often cited as being among the most important works of contemporary architecture in the 2010 World Architecture Survey, which led Vanity Fair to label him as “the most important architect of our age”.

Gehry’s best-known works include the titanium-covered Guggenheim Museum in Bilbao, Spain; MIT Stata Center in Cambridge, Massachusetts; Walt Disney Concert Hall in downtown Los Angeles; Experience Music Project in Seattle; Weisman Art Museum in Minneapolis; Dancing House in Prague; the Vitra Design Museum and MARTa Museum in Germany; and the Art Gallery of Ontario in Toronto. But it was his private residence in Santa Monica, California, which jump-started his career, lifting it from the status of “paper architecture” – a phenomenon that many famous architects have experienced in their formative decades through experimentation almost exclusively on paper before receiving their first major commission in later years.