This was my first Grateful Dead ‘experience’ and I had no idea what i was in for.

At 19 I already considered myself a psychedelic veteran but this particular day i met my chemical match. The temperature didn’t help – it was over 100 degrees by noon and topped out around 115. The warmish Miller Genuine Draft was plentiful and surely made things worse. By showtime i was in such a state that my friends had to carry me INTO the show (the next few years would see me carried OUT of several)!!!

I almost forgot to talk about the Lot! Man, I’d never seen anything like it! Tens of thousands of hippies dancing, singing, selling grilled cheese and acid, drinking, loving. There were plenty of cops but they didn’t seem to care about anything as long as no one was fighting. People were selling doses and shrooms openly along with the sandwiches and beers and what-not.  I’d been to hundreds of punks shows as a teenager and those were pretty free and anarchistic but not in the same ways at all. This place was so liberating! Everyone had a smile and a hug, and did I mention the acid? This being my first Dead show i had no inkling of the darkness lurking underneath it all (later on that)

So, Showtime! and I’m being carried in. I vaguely remember my friend, Doug (the guy responsible for dragging me to this insane circus) telling the ticket-takers that I’d had a bit of heat exhaustion or something. They didn’t seem to care and we made it in safely. I was physically unable to walk around at this point so my friends got me a drink and set me at the very back of the crowd on the lawn so they wouldn’t lose me, I promised not to wander off. The entire first set is a blur of visible tangible music, alien probing and sweat. But mostly I just remember the backs of peoples’ knees. Lots and lots of the backs of peoples’ knees (I don’t think I even so much as stood up). My girlfriend found me at the end of the set and i discovered that i was no longer “one” with the ground so off we went ‘a wandering.

Set 2 started with some crazy music that had me convinced that maybe these guys were more hip to the dark side of the force than they let on. My mind was calling for its mother for the entire first song (Victim or the Crime) but at the same time things were becoming a bit clearer. This band really knew how to sonically manipulate a mood. I will never ever ever forget a moment a little later in: the post-Scarlet Begonias jam was heading into Fire on the Mountain (I didn’t know this at the time) and as Jerry hit the first wah-wah notes of ‘Fire’ this beautiful young blonde dreadlocked girl turned around and hugged me with tears streaming down her cheeks, smiling, laughing, still dancing. “Fire, Fire…” she whimpered. I guess you had to be there but that’s the exact moment I realized the validity of the personal connection that these people had with this Music. It was just a glimpse but it was forever etched on my mind’s eye and burned into my soul.

I don’t really remember a lot of details from the show. I never even caught a glimpse of the band. I was pretty sure there was just a big stereo onstage. I was way too busy watching people and trying to absorb what I could o f the Music. 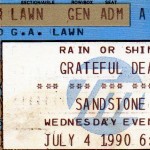 We got lost trying to cut through the Renaissance Festival grounds that border the parking lot but that was actually pretty cool. A cop on horseback found us and a bunch of other lost trippers and led us out to the modern world.

I wouldn’t have believed you if you’d told me I’d spend the next 5 years following Jerry Garcia around the country but off and on that’s what I did. The July 4th, 1990 Sandstone Dead Show was one of those life-altering events that you just can’t imagine the ramifications of. 20 years on and thinking about those years still brings smiling tears to my eyes.
I’ll write more when I can. Hope you enjoyed the story!