The style of which she has alternatively labeled as “Victoriandustrial”.

She began playing the violin at age 4, and left regular school at the age of 9, with her goal of becoming a world-class violinist. She practiced eight or nine hours a day and read a wide range of literature. Progressing to writing her own music, she studied under various teachers and went to Indiana University, which she left over issues regarding the relationship between classical music and the appearance of the performer. Her great ancestor Alice Pleasance Liddell inspired the children’s classic Alice’s 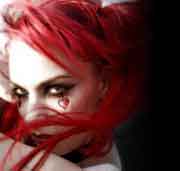 Adventures In Wonderland, by Lewis Carroll.

I first saw her on my favorite New Age Musician, Patrick O’Hearn’s video “Delicate”.  After reading about her life, and dealing with bipolar disorder, the video seemed to depict her in different beautiful moods. So I started doing research on her. She incorporates elements of classical music, cabaret, electronica, and glam rock with theatrics, burlesque, and “flamboyant” outfits. I saw that she was coming to Houston and wanted to see her unique act.

This was a great show, a bit more of a show then a concert, a lot of the Music was prerecorded. Emillie did play her electric violin and harpsichord a couple of times. Emilie and her fellow 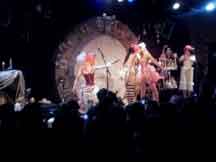 musicians known as the Crumpets were bantering back and forth. The interludes in between made it seem like a play at times which was a unique approach. I enjoyed how each Crumpet had something to bring to the show especially Contessa with her amazing acrobatics.

I enjoyed all the songs that were played. It was a small turnout at Houstons The Warehouse Live. I’m always disappointed at seeing small support for incredible musicians. It was a lot of fun mingling with the different people who attended. It did make for an enjoyable evening experiencing a different sort of performer.

Queen or the Clash? Choose wisely

Lady Liberty and the In-Laws