I’m from Kansas City and visited my youngest sister in New York City, and had to take the pilgrimage, to the hall of fame in upstate N.Y. by train. And we went during Spring break, March of 1990- there were hardly any people there, everything was easily accessible, what a great little town.  People leave their windows rolled down, the keys in their cars, man it was like Mayberry.

I took a lot of photos of great exhibits they had, you may see them at wenshots.com. my username is JosephT007.      They have an old fashioned theatre where every 2 hours they show baseball’s greatest moments by bat or glove, it was incredible. They have every team displayed, film booths, and the hallowed hall where all the plaques are, babe ruth, gehrig, ted williams, and what was so cool during brett’s, nolin ryan’s and robin yount’s induction is they were the last plaques on that wall with those olden greats, as they were constructing a new wing for these new breed of baseball players. I’d go out at night and stop at a friendly bar and mingle with the townfolk, at our bed and breakfast we called the local cab and a family man in the middle of his dinner took us to a great restaurant and told me I could pay him on our trip back to the bed and breakfast, that was old time americana.

Man I wish I lived there, very laid back a little village. thank you, sincerely Joseph Terrazas 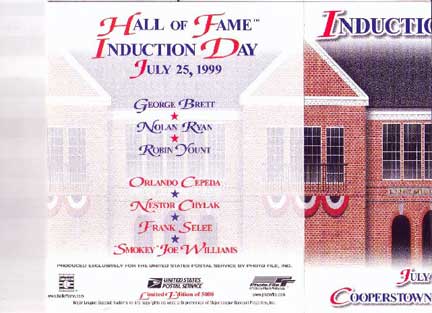