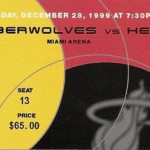 Miami Arena. Our company’s insurance agent, a Miami native, provided excellent tickets for the December 28, 1999, game against the Minnesota Timberwolves. We had previously attended Florida Panthers games at the arena, located in the Overtown section west of downtown Miami.

The Heat, led by Alonzo Mourning and Jamal Mashburn, defeated the Timberwolves and Kevin Garnett, 89-78. Attendance was 15,200, about 1,500 below capacity. Mourning topped all scorers with 30 points, while Garnett had an off night, going 7 for 24 for 16 points. Malik Sealy played for the T-wolves that evening. He was killed in May 2000 after his SUV was rammed by a drunk driver. One of the referees was Tim Donaghy, who would later go to prison for gambling-related charges. The Heat finished 52-30 under coach Pat Riley and were defeated 4 games to 3 in the Eastern Conference semifinals by the Knicks. The T-wolves, coached by Flip Saunders, ended strong at 50-32 and were eliminated in the first round of the Western Conference playoffs by the Trail Blazers, 3-1.

The Heat moved into the 19,600-seat American Airlines Arena (coincidentally designed by a friend’s brother and sister-in-law) for its next game. The Miami Arena was basically obsolete the minute it opened in 1988, one year before the Heat’s formation. Capacity for hockey was less than 15,000 – the Panthers would build their

own arena in northwest Broward County – and the few luxury suites were located above the one balcony level. After several unsuccessful attempts at adaptive reuse, the Miami Arena was demolished in fall 2008, only twenty years after its opening.