A sports rivalry can propel the game experience to a whole new level. That’s what happened on July 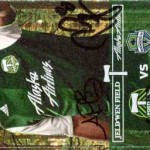 Fully aware of the intense rivalry and already committed to season tickets for the Timbers inaugural year in Major League Soccer, I reminded my sister repeatedly to order tickets months in advance of a game I knew would sell out. She finally did, but didn’t fully grasp what the rivalry meant until the day of the game.

10 buses of pumped up Seattle supporters drove past her on game day banging on windows and displaying gestures inappropriate for children, lines of Timbers Army supporters set up camp outside Jeld-Wen Field hours before the game chanting until the gates opened, and droves of fans arrived early to soak in the energy generated by the intense rivalry dating back to the 1970’s. 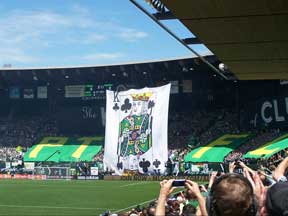 Inside the stadium, the energy was electric, the noise level was louder than ever and fans from both factions stood supporting their team until the very last whistle blew. The first half was scoreless as both teams played with some hesitation, but the second half exploded with excitement as the home team scored the first goal. The Portland Timbers led twice and it looked like they might pull off an upset, but a defensive mistake cost them the match. It was a heartbreaking loss for the Timbers and their fans especially since they were in the run for the Cascadia Cup.

With some prior planning, I was able to secure post-game autograph vouchers for our group which helped take our minds off the defeat temporarily.  We met (6) Portland players – Jewsbury, Cooper, 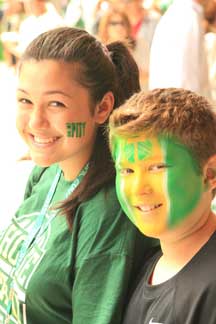 Marcelin, Hall, Lowry and Brown –  that day and my daughter, nephew, their friends and parents had a blast!  I, of course, asked them to sign my ticket stubs from this Portland vs. Seattle match. We’ll never forget it and plan to be back together again….for a Timbers win next year!!

The Sweetbay kid of the game