by Gaz
Thanks to our friends at www.queenconcerts.com for their support 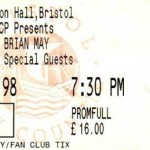 venue I’ve ever been to. More of that later…

Support act The Marys. O please. A trundling, plodding, sluggish waste of a good half an hour. All long hair and jeans and ‘serious’ MOR. I’ve often been amazed at how Queen managed to sound as if there were about 15 people playing onstage, but I’ve never before had the misfortune to sit through a five piece that sounds as if there are only 3 people playing. Imagine a stoned Del Amitri, but without the talent. They were even giving boxes of their cd away afterwards. I guess that’s called promotion, but I think actually playing live worked against this. Ho hum.

They finished, thankfully, and an extraordinarily busy stage crew set to work. Over-testing the mics and guitars, they really seemed to be overdoing it. But at least it brought back fond memories of 1970 with all the “One-a… two-a…” and roadies generally making horrid noises with the guitars (including good ole Red). 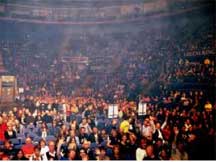 So… the Colston Hall. A nasty 1960s creation that looks like it was designed by committee. Foul laminate walls and unpleasant fake gold leaf representations of the muses and arts. All seating. A narrow rake in the stalls. Bear with me on this – it’s leading somewhere.

Right. So the announcement about Twitty is given and suddenly one of the Hall’s greatest problems is exposed. People at the front, quite rightly, stood up. Because there is such a small gradient behind the first ten rows of seats, people couldn’t see. So they stood up. This resulted in everyone doing exactly the same thing. Fine. Shouldn’t be that much of a problem. People can go down to the front, leaving their seats, and those that want to sit down would be able to see too. Wrong. No-one was allowed to go anywhere, resulting in quite a bit of anger. Ok, there are fire regulations and so on, but really, what IS the point in having an act like Brian May in a hall where everyone is forced into regimentation? Has this venue not had rock acts booked before? How on earth did they cope when Queen themselves played here on the Crazy Tour back in 79?

Anyway… enough of that. On with the show.

The audience was wildly enthusiastic, and during the Queen section, you could see bunches of guys dancing their arses off even up in the balcony, with a wild abandon that was lacking in the London audience. This was not a self-conscious audience 🙂

But there seemed to be something amiss. Brian kept having odd moments where he looked confused, missing some lines, pausing, and so on. Then it made sense. Spike’s microphone was whistling intermittently. Brian was sometimes singing and nothing was coming out. Don’t get me wrong – the playing was, as ever, superb, but there were clearly problems.

Most of the show was as before, with the exception of Business being left out, as well as Spike’s and Jamie’s solos, and also the band not being introduced. Eric, however, with his flaming sticks, was incredible. I hadn’t seen this before, and boy o boy, I was transfixed. The man has such incredible power and it’s scary to watch him play. It’s great to see a ‘short notice replacement’ for Cozy being so at home in the BMB, and his astonishing controlled hysteria method is something everyone should see at least once in their lives. But something odd happened. At the end of his solo, he stood up, and screamed into the stage left wings “Who shut the fucking door? Don’t shut that fucking door again.” This was either simply nothing more than a gag, or something else was awry. Brian, however, just grinned. (As it turns out, Eric was indeed serious – he needed to have proper ventilation for the fumes, and some fool had decided to close the only thing that was letting fresh air onto the stage.)

Eric deliberately started the WWRY intro with completely wrong drums (I’m sure someone will be able to tell me exactly what he did) which was pretty funny, but even so, the crowd picked it up immediately with the hand claps. Then, after Tie Your Mother Down, it was “Good night Bristol” and they were gone.

Applause, chants of “Brian! Brian!” but he still didn’t come back. 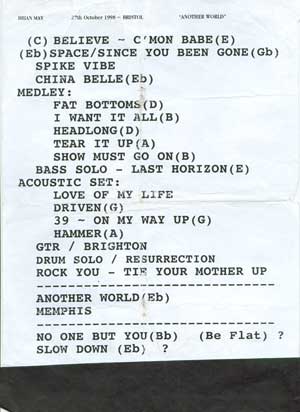 After what seemed an eternity, he re-appeared, but there was definitely something wrong. “Can I see all you guys for a moment?” he said with his voiced cracking with emotion, “Lift your arms up or something. I need to see and feel and to touch you. I’m gonna come down there. I know the security people have been stopping you from coming down here all night, but they’re not gonna do that anymore, cos they know what good people you are”

This was a bit of a surprise to security.

People gradually started to make their way forward, but with some trepidation, and rightly so. The security weren’t allowing them.

Brian became uncharacteristically pissed off. Big time. “Mr security guard – I’m gonna wait here all night til you get out of the fucking way. I can wait all night – how about you?” The guy stared back. Classic stand-off.

Eventually he realised he was on a hiding to nothing and backed down, leaving the audience free to clamber down to the stage.

“You’ll have to forgive me” said Brian, “I don’t usually say fuck”. Crisis over. All in all, the show was excellent – it was a great pity that the Colston Hall was used for it though. 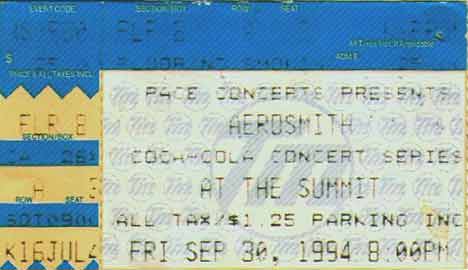 Stevie Ray & Joe Cocker – What would YOU do 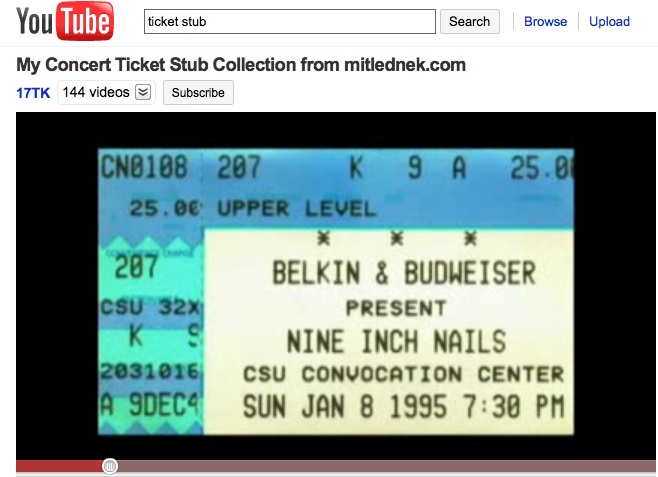