New Year’s Eve 2011 was one of the best nights of my life.  My favorite band, Brand New, had announced that they would 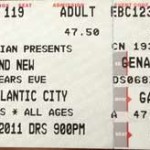 be playing a special set at The House Of Blues in Atlantic City, NJ to ring in the New Year.  2011 marked the 10 year anniversary their debut album, Your Favorite Weapon, and they would be playing it in its entirety to celebrate that milestone.  They’d also be playing an acoustic set and a set comprised entirely of fan requests that they received through Twitter.  This was a huge deal as Brand New is fairly well known for playing whatever they want, however they want and not caring about who cares.

Brand New is also known for having their shows sell out within seconds, so there was a lot of stress going into even securing tickets.  The morning the tickets went on sale I made sure that I was at my computer ready to go, the tickets got listed on Ticketmaster – and I couldn’t get them.  They literally sold out in half a second. I was bummed. A few minutes later, however, I got a call from my boyfriend telling me that he was able to get 4 of them and we were good to go.

The morning of December 31st, 2011 a bunch of my friends and myself piled into a car and made the trip down to The Showboat casino where we were staying.  I’m pretty sure that we only picked that casino because The House Of Blues is 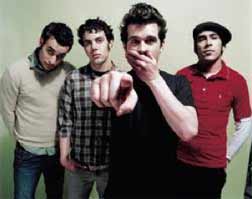 located inside of it.  While I might not have been lucky purchasing the tickets to get us into the show, I was lucky on the Roulette table! I won $500 that evening.  At that moment I just knew this night was going to be one for the history books.

The doors opened at 9pm, and people started making their way in.  Due to Brand New playing 3 sets, there were no openers (which was more than fine with me).  The House Of Blues isn’t the best venue.  It’s set up poorly (their sound booth is located squarely in the middle of the floor) and the sound quality isn’t all that great either, but the band sounded incredible anyway.  They started with their acoustic set.  It was a really nice way to set things off,  it lasted for about 7 songs and then stepped off for a brief intermission.

The next set would be what everyone came to see, Your Favorite Weapon all the way thru.  This album is very special to me.  It brings me back to being in high school and singing along in the car with my friends.  It was one of the first records to get me into pop-punk, and gave me my first taste of who would eventually become my favorite band.  The energy in the room was incredible.  You almost couldn’t hear Jesse Lacey’s vocals over everyone singing in the crowd.  I finally got to hear select songs from the album that I had be waiting 10 years to see the band play.  The best part of the night came right around the midnight mark.  The band went into the album closer, “Soco Amaretto Lime.”  The song ends with the line, “you’re just jealous ‘cause we’re young and in love,” and as the ball dropped, Jesse sang those lines over and over.  Getting to share a midnight New Year’s Eve kiss with my boyfriend while balloons and confetti fell and those lines reverberating in my ears is a memory I’m sure I will never, ever forget.

The band then stepped off the stage for another short intermission and came back to play their fan request set list.  I got to hear them play b-sides that I never thought I’d hear.  They played a song that became dubbed as “Nobody Moves” that came few a set of leaked demos.  Seeing them play that was something truly special.

They made their final exit from the stage at around 1 in the morning, leaving me and my friends with memories (and future hangovers) that we all swore that we’d never forget.