I’ve been being one of Adam Lambert’s local biggest hometown fans from San Diego. Adam 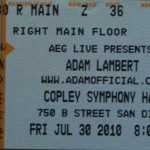 Lambert is my glam rock singing sensation, before he found fame and talent on the eighth season of American Idol. He finished the competition by coming in second place as runner-up.

This has been my very first solo concert experience to get a glimpse of Adam Lambert since the “American Idols Live!” Tour the year before in 2009. My friend, Kelly and I were then 24 and 25 years old as we went to our local Glam Nation Tour stop here in our city and his hometown, San Diego, CA on July 30th, 2010.

During the whole show at the concert, my friend Kelly and I were both having a ball and a heck of a time. We’ve heard Adam sing the words to every song he remembers. Most of them from his album, For Your Entertainment, and some he remembered from when he was on American Idol.

He even made us dance to the upbeat songs of his along with the rest of the fans in the crowd.

When the show was over that night, Kelly and I were standing outside the venue right by the stage door in the freezing cold. We were waiting to see if Adam Lambert was coming out to sign autographs for his fans. And while we were waiting, I’ve met Adam Lambert’s bass guitarist from his band, Tommy Joe Ratliff after when he came out. I’ve got my picture taken with him. It’s way cool.

Then Adam Lambert finally came out through the stage door of the venue. He was signing autographs for his fans until we saw him hearing Kelly‘s voice when she pointed out to me and said, “ADAM, SHE’S YOUR BIGGEST FAN!” as she yelled out by making eye contact with him.

After the eye contact that Kelly made with Adam, I was making my dream coming true. So he walked up to me and he signed my advertisement page with his initials and handed it back.

And finally after that, Kelly and I were ready to leave and headed home, I said, “Thank you!” out loud to Adam, and he responded with saying “You’re welcome!” to me.

That was a story that made my Glambert dream that fulfilled to come true. 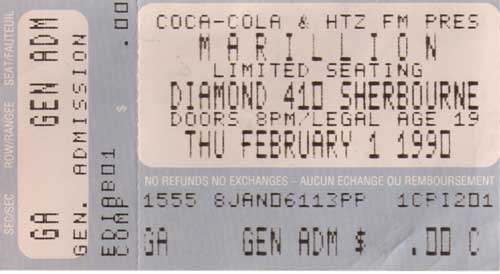 Saw the show and still got paid!

Brian May in Bristol, UK