I had taken my Architectural licensing exam in NYC. The exam at this time was given only once a year on the same 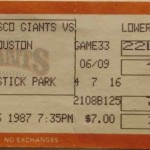 days across the county and 4 days of testing. So I had planned to take a break after the studying and taking the exam.

One of my stops was in San Francisco to see a college friend who settled out west. After doing the normal touring of the city we when to see the Giants play the Houston Astros at Candlestick Park on the bay.

She told me to dress warm, now I’m from NYC where June is a beautiful month for weather and the day time temperature in San Francisco was very different. So off to the stadium we go with wool caps, winter jackets and gloves.  Then as the game started at 7:35 pm and the wind changed and the fog rolled in off the bay bringing with it the cold air. It was so cold I thought it was mid February in Central Park. At the

end of the aisles going up from the seats there are doors to stop the wind from blowing thru stadium. This night the Astros beat the Giants 9 to 6, it was unremarkable game and both teams hit 3 home runs. Now I know what Mark Twain meant when he said “The coldest winter I ever saw was the summer I spent in San Francisco”.