There isn’t a more beautiful place to watch a sporting event than Augusta, and there isn’t an uglier 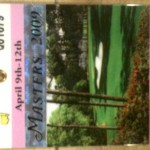 place to watch someone fall to pieces either. The 2009 Master was a place for both as Angel Cabrera won a green jacket and Kenny Perry handed it over to him going bogey-bogey on the last 2 holes.

Not like you can get anywhere near those holes to see anything. The real estate might as well be passed from generation to generation, but when Perry cracked I think I heard little pieces of glass hitting the ground. He missed that last one and opened the door to the spectacle of a Master’s playoff. It was Cabrera, Perry and I think Chad Campbell (who dropped out quick) but after the 2 final regulation holes nobody thought Perry could pull it together.

In the days of Tiger vs Phil all the time, it was cool to see a golf course beat all the big names, and at the end crown a winner  because he was the last man standing. It’s a quiet game, but like anyone who’s ever picked up a club knows, it can break you down quick and leave you using words you’re momma would wash you mouth our with soap for.

Opening Day and a No Hitter – 2 Games 1 Ticket