I was happy to get a ticket to any part of the All-Star celebration at Yankee Stadium. And to be 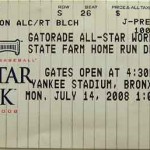 honest I was surprised at how cool the Home Run Derby was. In the 1st round Josh Hamilton, who has been in and out of rehab a whole bunch of times set a record with 28 dingers before making 9 outs.

A lefty knocking it out of the park at Yankee Stadium isn’t exactly news, but hitting 3 out for every one that he missed was really impressive. He must have swung himself out because he lost in the finals – only hitting 3.

Our boss hooked us up with the tickets (he kept the game seats for himself) and we had a really great time. Since there was no Yankees in the contest – and NY loves a front runner – the crowd really got behind Hamilton.

It’s weird rooting for someone NOT in pinstripes in the Bronx and I kept wondering if lightning would strike. It didn’t.  Enjoy the video.

Page and Plant or a Wedding….Hmmmmmm